If you were checking my Twitter feed from around 5pm on Sunday, you’ll know it’s been all about the Oliviers!

A sunny afternoon in London for the @OlivierAwards – "it must be some sort of a sign", eh @KinksMusical?! 😉

Part of our logic for timing #SunnyChallenge when we did was to build up to the biggest theatre awards ceremony in the country – particularly as Sunny Afternoon had collected 5 nominations! Not bad by any standards, but particularly for a properly new musical with no real household names in the cast. And playing in a modestly sized, hidden away theatre! You can probably imagine that nominations day was exciting enough for us…

It seemed to sneak up on us slightly, having felt like a really long wait not long ago! And I only sorted out my outfit a few days before… I WORE A DRESS. A. DRESS. I haven’t worn a proper dress in public since I was about 12… I certainly pick my moments, red carpet an’ all! In honour of Sunny Afternoon I’d gone vaguely 60s style, and with my little Kinks badge for luck.

It was truly lovely to share such a special moment with three of my bestest Sunny friends. Such a surreal experience walking up a red carpet, with expectant crowds & paparazzi dotted around the place!

We did hope that we’d time it right to catch a glimpse of some of our lot, but were probably too punctual! 😉 However, we were very happy (& surprised!) to briefly catch them up on the terrace during the champagne reception (I know, very fancy!) – it was lovely to be able to wish them luck for both their performance, and for all the awards they were up for. I’ll be honest, if we hadn’t won anything at all that little encounter would’ve completely made my day anyway! 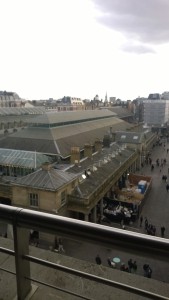 I’ve never been to the Royal Opera House before; it’s truly beautiful. And, actually, it wasn’t quite as ridiculously far away as I’d envisaged! Despite being in the second row from the back of the Upper Amphitheatre.

The first event to look forward to was the cast performance – they were third on, so we didn’t have too long to wait. And as we knew they were doing the finale (Lola/All Day And All Of The Night/You Really Got Me/Lola), I was even more excited to be sat slap bang in the middle of the row, with a perfect view of the drum kit! It was both super exciting & stupidly emotional, from the drums being wheeled onto the stage, to the performance itself.

And, of course, they completely rocked it! The most apt (& the best) performance of the night; it had a truly celebratory feel. They may have been the first band to ever perform at the Oliviers ceremony, but they looked completely at home. The whole cast was properly involved, not just brought on as a token gesture or kept in the background – and they got the audience involved. Obviously we knew the drill, so were clapping along from the first chord to the last, but to get other factions of the crowd involved was a magnificent feat!

We may have missed out on Best Sound Design in the first act, but from then on it was a clean sweep! After waiting a while for our categories, it seemed only fair…

The Autograph Sound Award for Outstanding Achievement in Music was one that, before the ceremony, seemed the most likely to go our way. I mean, who can compete with Ray Davies? Still, nothing’s certain, so we still reacted with shock as his name was announced. From here on it just got more & more emotional!

The man who started it all, @RayDDavies, has been awarded the Olivier Award for Outstanding Contribution in Music! pic.twitter.com/TAKclcXMek

I had been oddly confident about George’s chance beforehand; unlike the audience-powered WhatsOnStage Awards, he wasn’t up against anyone from Miss Saigon, and I genuinely hadn’t come across a review that hadn’t raved about his portrayal of Dave Davies. But this was no place for being rational! We screamed, we cheered, we cried, we laughed. We swelled with pride.

And it wasn’t over yet! A momentary tease (Jon Jon Briones was in the same category) and then we heard the surname ‘Dagleish’. Was this really happening? The smiles widened, the tears continued to flow… And I, for one, started to believe that we could take our final prize…

John and George with their Olivier Awards! #Oliviers pic.twitter.com/jchZBemEyW

WE ONLY FUCKING DID IT! After the announcement my instinctive reaction was to just scream. I was in heaven! The dream had come true; our ‘little’ show had triumphed. A true underdog story if ever I saw one!

I’m so glad I was there to witness this, and to experience the total joy first-hand. Jess & I couldn’t have timed or planned #SunnyChallenge week any better – what a culmination! It’s still quite difficult to comprehend, let alone put into words what this means.

Without this show my life wouldn’t be nearly so good – and definitely not so technicolour! I’m so proud of everyone involved; it couldn’t have happened to a nicer, more talented or more down to earth bunch. Love to you all!

8 thoughts on “(Unofficial) Day 7: All Day and All of the Night”