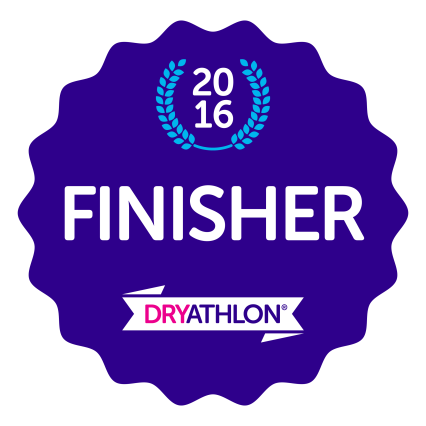 So, I did it! A whole month without alcohol. Most of the time it actually hasn’t been too bad. Generally once I set my mind to something I will do it!

There have been some moments over the course of the month when I have been tested – a couple of times sat at a table at a certain show, some time in bars & pubs, and having to spend the early evening in the West End on a Saturday… In the case of the latter, the gin would have been entirely medicinal! People really can be so annoying sometimes.

January really was a bit of a bummer. And that is possibly the understatement of the year so far! It feels like there have never been quite so many famous deaths in such a short period of time, and a fair few from cancer. So whilst the Dryathlon started out as a bit of a personal willpower challenge, it suddenly started feeling a lot more important.

That probably sounds a bit wanky, but I think you know what I mean. As I was getting sponsored, my endurance was helping to raise money for Cancer Research – it was imperative that I carried on, so people hadn’t parted with their hard-earned cash for nothing. That extra money being ploughed into Cancer Research’s coffers will be of real value to help continue funding their work. There are so many different areas of science that are being explored to try and find cures, so the more money the better! An exciting area of research currently under focus is the use of immunology in cancer therapy. The Immunology Project Awards on offer from CRUK are a good example of how new research can be spread across disciplines and brought together to help show the bigger picture.

Thursday (4th February) is World Cancer Day, which is another opportunity for you to contribute to countering this disease. One way is by purchasing a Unity Band from Cancer Research (online or in-store).

Sadly this will come too late for some beloved figures, including Alan Rickman, Terry Wogan & David Bowie.

All are shocking, and no loss is greater than any other, but I think it’s fair to say that the most visible outpouring of grief across the world came from the news of Monday 11 January. Bowie had just celebrated his 69th birthday with the release of his critically acclaimed new album Blackstar, fans everywhere were in celebration, and then all of a sudden he was gone. The news was the very first thing I heard that morning, and it set the tone for the week & beyond. I’m not even a committed fan (I love everything of his that I know, which is surprisingly a lot more than I initially thought), but it made me incredibly emotional.

It is both inspiring and humbling that he managed to remain so active & creative, despite knowing that the end could be at any moment.

But it’s not my place to keep on about this. Just read Jess’ tribute instead.

I had aimed to raise £150 over the course of January – thanks to some real generosity (including from people I’ve never even met) I smashed this target with a couple of days to go! My total currently stands at £160. I’ve done a few things to raise money for charity over the years, but I’ve never made anywhere near as much money as this before, so thank you ALL.

One thought on “End of the Dryathlon”