Whilst obviously we all remain hopeful that this year isn’t going to be as bad as last year, it’s probably a good idea to distract ourselves with art and escape into Theatreland. And luckily it seems to be shaping up rather nicely!

I already have quite a few nights booked up to keep you interested in the blog, and will be continuing to keep my time as filled as I can without collapsing in a heap… Mind the Blog will also be going ‘on tour’ as much as possible during 2017; I enjoyed documenting the UK leg of Kneehigh’s 946 tour at the end of 2016, and am looking into revisiting some of those theatres (as well as branching out to others). I’d love to visit The Curve in Leicester – and I really should take a trip to Northampton’s Royal & Derngate. Eventually I’d love to expand the touring side of things to taking in the Edinburgh Fringe, but that may be a bit ambitious to fit in this year.

I’ll also still be writing for BroadwayWorld UK every now & then. If you haven’t already, feel free to subscribe to email alerts when a review of mine goes live. 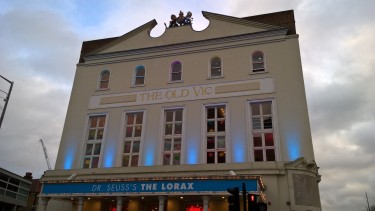 One of my favourite theatre companies, Scena Mundi, have a terrific set of events planned for 2017. I previewed SEASON 2017 a few days ago & am now counting down to the first forum at the end of the month.

There are also some confirmed Sunny alumnus projects to be heading to: Gabriel Vick in Promises, Promises, Lillie Flynn in Fantastic Mr Fox, Lloyd Gorman in Worst Wedding Ever, Tom Whitelock in A Clockwork Orange, and John Dagleish in A Midsummer Night’s Dream (following in Ned’s footsteps as Lysander). I also still have yet to see Dom Tighe in She Loves Me, and Ashley Campbell with the RSC in Stratford-upon-Avon.

The Old Vic’s entire season has me salivating (& it’s already started brilliantly with ‘Art’). I do love Stoppard’s work, and have wanted to see Rosencrantz & Guildenstern Are Dead for a while – though with that casting I’ll have my work cut out getting a ticket… I’m intrigued by the new play Girl From The North Country, with its Bob Dylan inspiration, and clearly I can’t wait for The Lorax to return!

2017 could be the year of the old school musical. 42nd Street is opening at the beautiful Theatre Royal Drury Lane once Charlie has visited the chocolate factory one last time; I saw a touring production in Plymouth a few years ago & absolutely loved it! If you love tap numbers, this is your heaven. And I’m really excited about An American In Paris, especially after attending its press launch last year.

Some other West End productions that are enticing me include:

Having missed out a few times before, I’m finally getting to see Anthony Strong perform this year (nay, this month) – and as a bonus I get to spend the whole evening at Crazy Coqs, as Julie Atherton’s new revue January is on at the same time. I really cannot wait for that double bill.

I thought I should also make some more theatre resolutions:

And, as with 2016’s Shakespeare page, I’ve decided that I’d like to start a new one this year (though obviously I’ll keep updating the page when I see Shakespeare plays). Given my increasing passion & enthusiasm for puppets, that was the clear choice! I recently saw another Kneehigh show & discovered Islington’s Little Angel Theatre – it’s really cute and the show was stunning, so I’ll definitely be back to see what else they have to offer. As well as seeing more shows with puppets in, I’m hoping to learn more about the technical & creative side of things to expand my knowledge further.

So, without further ado, let the adventures begin!