Tom Clarke, former frontman of Coventry rock band The Enemy, and playwright Geoff Thompson have collaborated to create brand new musical drama We’ll Live or Die in These Towns. Set to make its world première at Coventry’s Belgrade Theatre this autumn, it is soundtracked by The Enemy’s debut album of the same name (with Clarke as Musical Director) with an original story written by Thompson – and directed by Hamish Glen, the Belgrade’s own Artistic Director. As Coventry prepares to assume the title of UK City of Culture in 2021, this is the first in a series of productions at the theatre that will tell stories with the city at its centre.

The show is about young musician Argy; he’s on the brink of hitting the big time, but just before a big homecoming gig he suffers a crisis of confidence that threatens to undo all of his hard work. In a bid to help him work out the course of his future (one way or the other), Argy’s manager sends him back to his hometown to gather his thoughts and to see if he can contain his anxiety long enough to make this life-changing decision – will familiar faces & places be enough to help him conquer his fears and seize the moment of a lifetime?

Taking on the lead role of Argy is Tom Milner, familiar to many for his screen roles in Waterloo Road and Holby City – as well as forming part of #TeamRicky on series 5 of The Voice UK. He will be joined by Steven Serlin (who appeared in The Wild Party at The Other Palace last year) as the band’s manager, The Ambassador, and a figure from Argy’s past, Owl. Playing Argy’s brother, Bill, is Quinn Patrick (recently part of the workshop for Bananaman the Musical) and Julie Mullins (Julie Martin of Neighbours fame) will be opposite him as Bill’s wife Hips.

Argy’s bandmates and friends will be played by recent graduates Andy Burse (Yudi/Sammy), Meg Forgan (Kusi/Megan) and Molly Grace Cutler (Shelly), alongside Adam Sopp, whose recent stage credits include Sunny Afternoon and 946: The Amazing Story of Adolphus Tips. Mark Turnbull (previously Jean Valjean in Les Misérables and Frank ‘n’ Furter in The Rocky Horror Show) completes the cast as a busker Argy meets whilst in the city.

The show’s writer, Geoff Thompson, enthused, “I can say without fear of exaggeration that the auditions were some of the most inspirational moments of my life. We saw veteran performers and kids just out of acting school: they all lit up the room. I’m so happy that we’ve secured our number one choices for each role.”

The album We’ll Live and Die in These Towns was released in July 2007, but its tales of disaffected youth are as relevant as ever. If the show can retain even a mite of the raw energy and emotion of the album, then it’ll be onto a winner; this particular album happens to be very important to me, so it’s rather thrilling that the fantastic songs will be given a new lease of life in this way – and potentially speak to a whole new generation at just the right time. 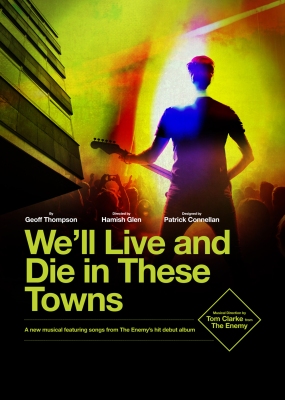 We’ll Live and Die in These Towns runs at Belgrade Theatre from 29 September-20 October 2018. A post-show discussion with Geoff Thompson & some of the cast will take place on Wednesday 10 October. Tickets are available online or from the box office (024 7655 3055). There are free tickets for certain performances if you’re over 18 & under 26 – contact the box office for further details.

One thought on “We’ll Live and Die in These Towns: cast announced”