“It’s close to midnight, and something evil’s lurking in the dark…” Yes, it’s that time of year again! Hallowe’en provides a brief respite in the outrageously early Christmas preparations; it’s a great excuse to get out those horror films or some classic gothic literature, but what if you want to get out of the house and avoid those pesky trick or treaters? There’s plenty to choose from all across London, so if you fancy doing something a little bit spooky tonight then here’s a selection of highlights…

Following on from last year’s Dracula, Tea Break Theatre are back at Sutton House in Hackney for their immersive, promenade production of the classic Mary Shelley novel Frankenstein. Just like Frankenstein’s monster, the building will be brought to life – and a spooky atmosphere will be provided by puppets and shadows… “I’m thrilled to be bringing this fearsome feminist Frankenstein to life this Hallowe’en!” says director Katharine Armitage. “Our production is going to be bolder and even more unexpected than anything we’ve done and will genuinely be a version of the story audiences have never seen before.”

2018 marks 200 years since the book was first published, and this production promises to be every bit as chilling & daring. It also has a feminist twist, inspired by the group of female squatters who occupied the house in the 1980s and saved it from destruction – Victor Frankenstein here brings a female Creature to life, allowing them to explore the expectations of the patriarchy and how women can suffer if they don’t live up to it.

Armitage continues, “In this year, which is both 200 years since Mary Shelley published this incredible book and 100 years since some women were first able to vote, it feels both important and special to be creating work which explores gender roles and expectations whilst also honouring a visionary writer and her wonderfully twisted creation.”

Tickets are selling fast – any remaining places can be booked online. 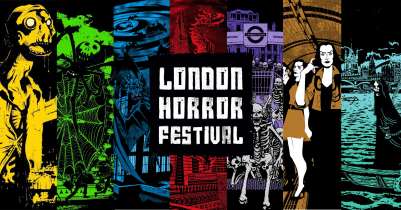 The London Horror Festival returns for its eighth year, bringing over 30 productions to Islington’s Old Red Lion Theatre. It’s been up and running for a few weeks already, but there’s still time to catch a few of its shows – including a couple that are running tonight!

Providence: The Shadow Over Lovecraft (7pm)

Turnpike Productions bring you their own look at the life of renowned horror writer HP Lovecraft. Dominic Allen and Simon Maeder use physical comedy, live music and anything else they can lay their hands on to tell the story behind the tortured mind behind an incredible body of work, laying the foundations of horror as we know it.

Written by emerging talent Leland Frankel, Restless Ecstasy present a brand new horror comedy that promises “acerbic social satire with gory violence, touching romance and blacker than black humour”. Kurt’s living with three infamous serial killers, who in turn believe him to be the ‘Subway Slayer’ – he’s managing to keep up the act, but will his girlfriend’s impending visit give the game away?

Emily Brontë’s Wuthering Heights is a gothic literature staple – and with the family growing up on the creepy Yorkshire moorland, could there be a better set of sisters to celebrate on Hallowe’en? Scary Little Girls pay homage to the Brontës by way of games, comedy, music and storytelling, with host Maria and her assistant Brannie. The show has been described as “the anarchic love child of French and Saunders and Hinge and Brackett!”, so be prepared for a night of fun & mayhem as this great literary family is celebrated in raucous fashion. 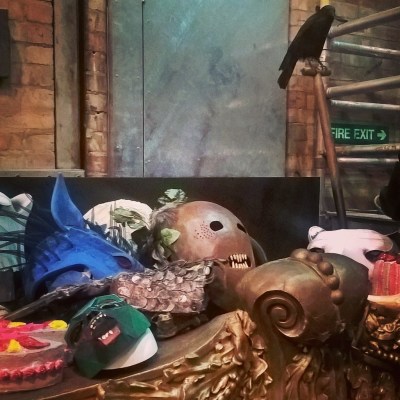 The National Theatre run various tours throughout the year, but there’s nothing quite as creepy as their late-night backstage trips on Hallowe’en… This really is a fantastic opportunity to delve into theatre superstitions, as well as getting access to rehearsal rooms, workshops – and possibly even a peek at the inner workings of the theatres. I went last year, when they were in the middle of preparations for Pinocchio (think lots of creepy puppets) so there was a lot to see there, and we also got taken underneath the Dorfman Theatre stage to see how it all works. Charlotte at Talk Stagey To Me had a sneak peek last week, so do have a read of her preview blog post if you need convincing…

Perhaps you’d simply like to stick with a blockbuster musical for the evening? In which case, you can’t go far wrong with Wicked. The alternative story behind the witches in The Wonderful Wizard of Oz has music & lyrics from Stephen Schwartz and book from Winnie Holman, creating a gloriously magical spectacle on the Apollo Victoria stage. The show has recently celebrated its 15th birthday, as well as 12 years in London – so do head along if you want to see what all the fuss is about! The current West End cast features Alice Fearn as Elphaba, Sophie Evans as Glinda and David Witts as Fiyero. (The UK tour is now at the Wales Millennium Centre in Cardiff, if you can’t get to London.)

The Woman in Black – Fortune Theatre

Now entering its 30th year in the West End, Stephen Mallatratt’s adaptation of the novel The Woman in Black (by Susan Hill) has to be the go-to recommendation for old school thrills & chills. There’s none of your fancy CGI and projections going on here – instead suspense and illusions are the order of the day, proving that not all horror has to be explicit. Richard Hope and Mark Hawkins make up the current cast of the play that’s guaranteed to make the hairs on the back of your neck stand on end – and your heart beat that bit faster…

I’ll finish with this as a slightly left field suggestion. Martin McDonagh’s brand new play (directed by Matthew Dunster) stars Jim Broadbent as Hans Christian Andersen, and also features Belgium’s genocide in the Congo… It’s been dividing the critics and audiences alike (you can check out my full review imminently), but it definitely falls into the dark & creepy side of things for the most part; Anna Fleischle’s design of Andersen’s attic is rather spooky, and Chris Fisher has also provided some illusions for the production. And with a 90-minute running time, you’ll be tucked up safe & sound at home well before the witching hour!

One thought on “Tricks and treats for Hallowe’en 2018”