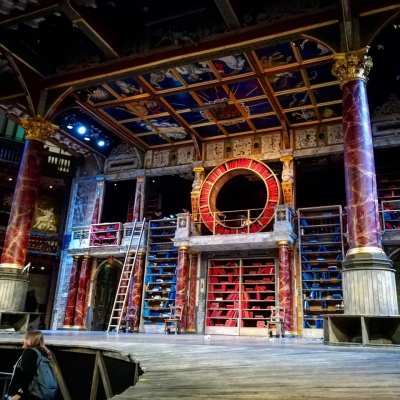 Once again I start off with the intention of looking after myself more – it worked for a short while in 2018, but I very quickly slipped back into old habits… I have at least blocked out regular nights off for half of the year already, so fingers crossed I can stick to that. This might also give me the opportunity to get a couple more challenge weeks in, if I can come up with some good ideas for them, as well as some more non-theatre review posts for a bit of variety.

A reminder also that I’m still doing a thing or two for BroadwayWorld UK (subscribe for updates if you like), and am also a ‘Mate‘. Mind the Blog is still going strong over on Instagram – so give us a follow!

Lots and lots going on again this year – I have plenty on my list… Ranging from Come From Away, Dear Evan Hansen, Leave to Remain, The Convert, a couple of different versions of A Midsummer Night’s Dream, to tours of We Will Rock You, Amélie, Rock of Ages, and Dead Dog in a Suitcase. It also can’t be too long before Michelle Terry announces her second outdoor season at the Globe, and I’m really hoping it’ll give me the chance to tick off some of the remaining Shakespeare plays on my list…

Amongst other things! Plenty of press nights (both for Mind the Blog and BroadwayWorld UK) have been confirmed or lined up – you should also be hearing from the Mind the Bloggers again. As well as the usual Vault Festival and Camden Fringe, I’m hoping to make a return to Edinburgh (though not going as mad as I did last year!), and am desperate to give Liverpool’s fringe festival a bit of a go (invites welcome!).

I’ll be back on the road again, with Wise Children continuing on tour, as well as catching the Les Misérables tour at Manchester Palace Theatre, Timon of Athens at the RSC, and Rutherford and Son at the Crucible; on my wish list are The Worst Witch, and a long-awaited trip to Leicester’s Curve Theatre. My very first theatre trip of the year, however, will not even be in this country – as I’m being sent to Paris…

So, what are my theatre resolutions for 2019? (Still carrying some over from previous years.)

I’m continuing my monthly preview posts, and will be bringing you news articles as much as possible – but I’d quite like to have another new blog series to take the place of ‘Missed The Boat’. I’ll get back to you about that!

My previous focuses for the year have been Shakespeare, puppets and Emma Rice – something maybe a bit unexpected is coming this year! As much as I love musicals, I’m getting tired of people only really paying attention to them and obsessing over developing an endless list of new (& distinctly unpromising) ones; plays have been exceptionally strong in recent times, both new writes and revivals, so I’m leading the charge to convert people to plays. And as there seems to be some sort of fixation on Arthur Miller this year that I can’t quite work out yet, I’ve decided to head in this direction myself. I’ve already booked to see most of the productions that have been announced so far, and have some others in my sights – I’m hoping to produce at least one post a month, including reviews and features.