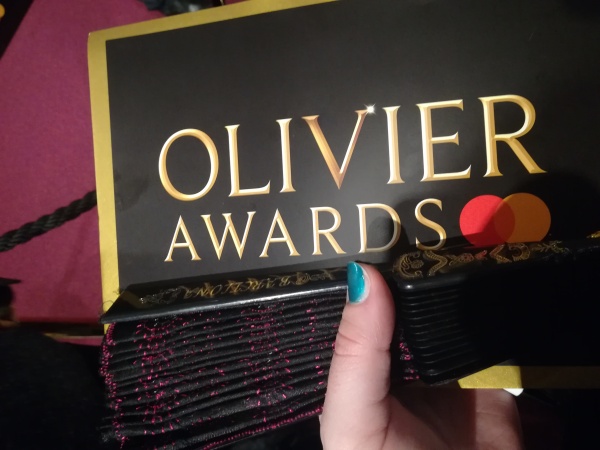 I think it’s safe to assume that nearly all of you reading this right now had one thing on your minds last night: the Olivier Awards. Whether you were at home listening to the radio/refreshing Twitter, at a viewing party, or inside the Royal Albert Hall itself in one capacity or another, there was certainly plenty to keep up with. I was lucky enough to be on press duty for BroadwayWorld UK (check out our Instagram stories to see who we chatted to on the red carpet and in the press room), so I had the inside scoop on a few things – and got to see first-hand reactions to all the winners.

The Oliviers are about all theatre, though it does often feel like it’s more of a showcase for the musicals, as they are the ones who get to perform at the ceremony, and Best New Musical is the headliner of all the regular awards. I have always thought this is rather unfair on plays (I’m sure there’s a way of promoting at least Best New Play a bit more), but with this being #MindTheMusicals week it seems like a good moment to have a look through the musicals-based winners and give you my thoughts.

There are a handful of awards that all productions can be nominated for, and actually musicals did end up beating plays on this occasion, with Come From Away getting the glory in Outstanding Achievement in Music and Best Sound Design, Company taking away Best Set Design and The King and I winning Best Costume Design. Whilst it might’ve been nice for something completely new to win through in the Music category, I don’t think you can begrudge Come From Away their victory (especially as this is one of the few shows where the audience refuses to budge during the playout) and Gareth Owen’s sound design allows the company to switch from song to dialogue without the audience losing a single word. I did love Company’s bold set design, though I couldn’t help but feel a little disappointed for Anna Fleischle – her Home, I’m Darling design brings a stunning two-storey house to a West End stage, after all! There’s no denying the sumptuousness of the costumes in The King and I, so a worthy win for Catherine Zuber, though this was one category that I thought was well suited to a Six win for Gabriella Slade’s efforts.

Musicals lost out in Best Lighting Design and Best Director – both to big winner The Inheritance. My choice for the former was actually another play (Lee Curran’s lighting design for Summer and Smoke was probably the best & most evocative I’ve ever seen), but I still have an issue with Best Director encompassing all plays & musicals. I know you could argue that if you split this one up then other categories would want to see the same change, which would significantly lengthen proceedings, but as you often see directors sticking to one of plays or musicals it does suggest that you can specialise more in one or the other.

As for the musicals-specific awards, by and large it all went as I predicted; I actually only got one of them wrong! So many people really took Company to heart, with its gender switch making it a very special show – and a piece of theatre history. It was definitely fair enough for them to take the Best Musical Revival award, I think, and both Jonathan Bailey & Patti LuPone gave incredibly memorable performances. It was a bit of a shame that they couldn’t complete the set with Rosalie Craig as Best Actress in a Musical, however Sharon D Clarke’s turn in Caroline, or Change was definitely a more than worthy winner. And as much as I was obviously rooting for Marc Antolin (Seymour, Little Shop of Horrors), I’ve heard some extraordinary things about Kobna Holdbrook-Smith’s portrayal of Ike Turner, and he was clearly overcome by the accolade.

The final couple of awards to consider both went to Come From Away: Best Theatre Choreographer and Best New Musical. Of the nominees in both of these categories, I’d argue that there couldn’t really be any other winner (though there is the caveat of my not having seen Tina – The Tina Turner Musical as yet). The naturalness & slickness of Kelly Devine’s choreography – in combination with Christopher Ashley’s direction – is part of what powers the show and makes it so breathtaking, and the way audiences have responded to the show as a whole (possibly the quickest & most prolific standing ovations in the West End right now) makes it incomparable to its fellow nominees. I named Come From Away as the frontrunner for show of the year back in February, and I’ll definitely continue to stand by that.

There may not have been an original British musical in the list of winners, but that merely reflects where we are at this juncture: on the whole, we are more successful at producing quality new plays. Six was the only possible Brit with a shot but, with all due respect to the show and its fanbase, I’m not sure it’s in the same league as its competitors in Best New Musical – its concert setup just doesn’t do it for me, as I find a narrative more compelling. It does feel at times that people are trying to force out a brilliant original British musical, when actually a gem of a show can come slightly out of nowhere – take Everybody’s Talking About Jamie, for example. As long as the right people are given opportunities to develop their work then we could see a complete reversal of this kind of results at the Oliviers in a few years’ time.