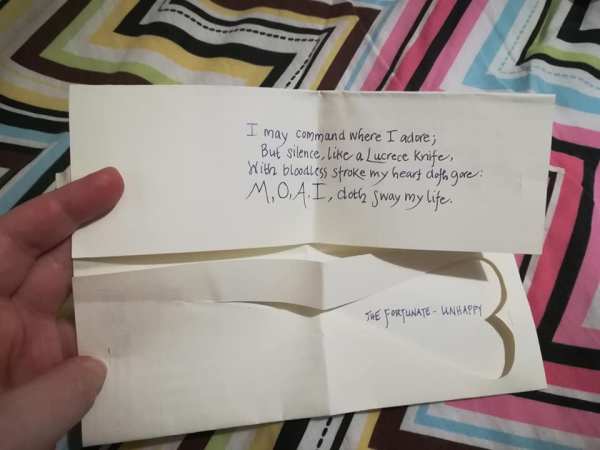 In our age of email, WhatsApp and recorded delivery post, we take the security of messages we send rather lightly. But have you ever considered the lengths people had to go to in the days before the envelope was introduced? Yes, this humble paper contraption only started to be used on a wide scale from around the 1830s-1850s – before then, the most common method of securing your correspondence was a practice termed ‘letterlocking‘.

I had never heard of this before, nor even stopped to think about how letters were sent back in Tudor England (though it’s thought that the locking of paper letters in this way dates back to the 13th century – in the Western world, at least). All you really see in films and TV programmes is parchment being simply folded and then sealed with hot wax. In reality, it’s far more complicated than that… 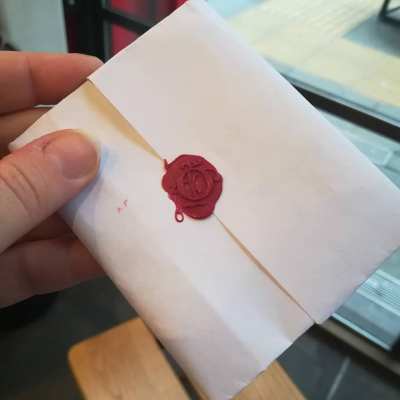 For one thing, the shape into which a letter is folded can potentially signify the sender and/or the contents before you even get to the handwritten address on the outside; there are intimate shapes (such as the ‘To our friend’ letter photographed), which also lend themselves to being passed around discreetly should the need arise. The amount of paper used – and whether it’s inlaid with gold or the like – is an indicator of the sender’s wealth & social status; the size issue is particularly accentuated if a short message is relayed on a very large sheet, for example, as it suggests the writer has resources to spare and cost isn’t an issue.

The way in which the letter is locked can also be telling, as well as being a good demonstration of Elizabethan encryption technology. Some letters were bound before sealing – this could be done with silk floss or even human hair (a signifier of intimacy? Economy? Lack of time?). Alternatively, the letter could be folded and then the ‘tuck & seal’ deployed; as opposed to simply folding & sealing, this is an added level of security as all corners of the letter should be safe from prying eyes – plus it’s a relatively quick way of getting things done.

For me, the most fascinating examples used paper locks, fashioned from the same sheet of paper upon which the letter is written – they could be fancy (see ‘Olivia’s’ letter to Malvolio) but also could just be made from a strip torn from the letter’s corner. It’s attached in such a way that whoever opens it either has to be very confident that it’s for them, or have the skills to be able to reseal it should they be working for a spymaster. It seems so simple, but in some ways makes those methods more secure than our habit of licking an envelope! 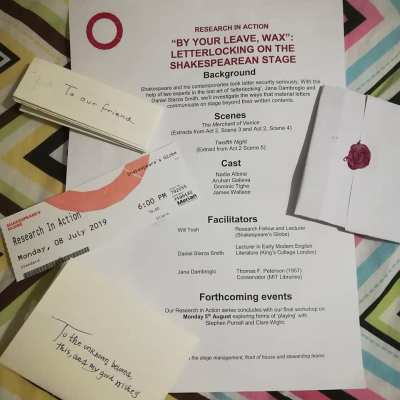 This Research in Action workshop was run by Jana Dambrogio and Dr Daniel Starza Smith, and was designed to help work through some of their theories & hypotheses as well as share their work so far. We were given a couple of sealed letters to open during the evening, as well as an extra one which we were able to lock at the end.

The team welcomed a troupe of actors (Nadia Albina, Aruhan Galieva, Dominic Tighe & James Wallace) to the Sam Wanamaker Playhouse stage to perform a few scenes from Shakespeare, to help demonstrate the various methods of letterlocking and how letters were sent back in Will’s day. We saw a pair of sequences from The Merchant of Venice and one very well-known scene from Twelfth Night (one of my absolute favourites – I was giggling in anticipation as soon as I got my second letter). I’d never really considered this aspect of theatremaking, other than not being impressed when actors are clearly ‘reading’ from a blank sheet of paper, so it was utterly intriguing to work out if the text informed an actor’s actions or if it was down to the actor or director to get it right. It also now sets the bar pretty high for prop makers in future traditional Shakespeare productions that I see!

I love shows that demonstrate a fine attention to detail, and I also love learning about historical innovations like this – especially as this is linked to the world of Walsingham’s ‘secret theatre‘ (I genuinely had a spy kit when I was a kid). I’ll be interested to see how the research pans out (you can keep up-to-date via Twitter, Instagram, Tumblr, Spotify, YouTube, Vimeo & Pinterest), plus I’m sure I’ll never look at a staged letter exchange in the same way ever again…

The next Research in Action workshop takes place on Monday 5 August, and is entitled Playing in Reality: Play and audience in Tudor drama.