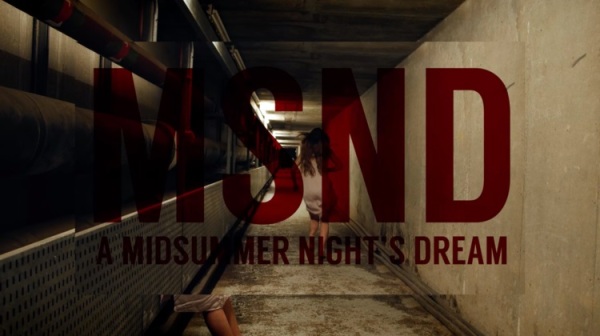 Robert Myles is a Shakespeare actor and practitioner. After 10 years performing almost exclusively in Shakespeare, he has produced products and workshops for actors, and is now working as a dramaturg and text coach for productions, including RIFT’s upcoming site-specific, immersive production of A Midsummer Night’s Dream at Alexandra Palace, set in 1936 on the eve of the first ever television broadcast…

What kind of things can Shakespeare dramaturgy entail?

I suppose this will vary wildly from production to production, but some things will remain fairly constant.

In this case, I’d say it’s been about unifying three distinct elements to create a harmony: the vision of the creative team, the realities of the space, and the needs of the play. Within this dynamic, my role was to put the play first.

Shakespeare wrote incredibly dense, vivid text that enabled his actors to infer all they need to about the world, the characters, situations and conflicts in the play. A lot of the shared knowledge his actors could rely on to interpret the text isn’t part of our experience now, so it’s easy to miss things that when found, can be super helpful. A lot of my work is about really zeroing in on these clues in the text and exploding them out so they can be easily identified and grappled with, first by the creatives and later, the actors.

Another relatively universal part of the job is looking at the play from an historical and structural standpoint.

In this case, I looked at Shakespeare’s apparent literary and sociological influences, theories about why he wrote the play, linguistic devices and the effects they create, the many different types of comedy deployed, and even pattern analysis. For instance, what are the fairies like and what are their powers? There’s a comprehensive breakdown of everything the text tells you. All this can be used to draw parallels to our own time and space, as well as that of the production.

All this helps to ensure creative choices are made in sympathy with what’s knitted into the piece. This means the production should enhance and enrich what’s there, as opposed to clouding or contradicting it.

From there, exploring bold interpretation, making selective edits and introducing new formats can help to focus more sharply on specific elements of the story, and creative choices in the production can create a totally fresh exploration that is immediately unique, relevant and invigorating – especially for the most-staged of all Shakespeare’s plays.

We talked about creating a ‘grammar’, a set of guiding principles that would ensure the piece felt like a cogent whole, empowering us to make radical choices in the interpretation.

Inspirations in the R&D included Ovid, Love Island, Marvel, The Addams Family, TOWIE, and of course, Alexandra Palace in 1936. We took an experimental approach where nothing was off-limits.

What was your brief for the RIFT project?

It’s a work in progress!

First, I helped with the development of the concept as part of the R&D, experimenting with performance styles and mixed media.

Now, I’m currently working with the creative team on the edit of the text, to serve their vision and get the run-time down. There’ll be some creative doubling, cutting and interpretation of scenes.

Next, I’ll also be serving as a text-coach for the actors, helping them mine the text for sense, context and stakes, to ensure the performance is as accessible as possible for our audience.

The piece will be a multi-sensory feast, and the location is one of the stars of the show, so it’s really important we get the clarity in place so the audience can fully immerse themselves in this unique interpretation.

Finally, we’ll be looking at that unique immersive, site-specific quality that is so exciting to bring to Shakespeare – how do we envelop the audience in this world, and make them feel a part of it? It’s really exciting.

Do you have a set process when you’re in dramaturgy mode?

As well as being an actor, my educational background is in Psychology, which is very research-heavy, so I always start with research.

Shakespeare has been performed and studied for 400 years; academics, historians and theatre luminaries have pored over the text, interpreting and re-interpreting it, making connections, getting inspiration, and sometimes going on wild conspiracy theory-style flights of fancy.

Because of this, a lot of the work has been done for us, if we seek it out. In order to make a meaningful contribution to the culture, it’s good to absorb the history of performance. You can avoid repetition just as surely as mistakes, take what’s helpful and discard what isn’t. Stand on the shoulders of giants.

Ultimately, it’s about going back to launch forward, like drawing a bow.

Once that process is done, the job becomes utterly responsive.

I serve at the pleasure of the senior creative team, who thankfully are amazing, ambitious, future-focused grafters. Someone once described them as “immersive theatre mavericks” and that feels right, from being in the room with them.

I have a toolbox of knowledge, creativity and facilitation skills, and I do my best to deploy them on whatever challenges arise.

Is there a lot of collaboration involved?

Absolutely! All I offer is information and ideas for the forum, drawing connections between the three elements we have to resolve; I exert no influence of my own, and the research would have no application without the senior creative team actively taking it on board.

During the R&D period, we had strong voices in the room with divergent experiences and tastes. That’s a great thing. I sometimes work with multinationals as a co-creator and content producer, and the best ideas in innovation always come out of a process that involves some friction. We all trust that everyone ultimately wants the same thing: to make the best show possible for the audience.

Everyone’s contributions are valued, and the more material that is generated, the more potential connections can be drawn between venue, vision and text.

You don’t know what a seed is going to be before you grow it out. An idea might seem wild or inappropriate, but if you nurture it, it could branch out in an unexpected direction that suddenly unlocks a great route to explore. As such, curiosity is super important.

Then it’s a case of bringing in what mathematicians sometimes describe as ‘elegance’ to the formula – how do the different connections complement and amplify each other to the benefit of the story being told?

How much of an influence does the type of venue have on your approach to a project?

On this project, it exerts a huge, defining influence. The whole treatment of the piece is being informed by the unique history of Alexandra Palace, and the quality of its extraordinary spaces.

Ally Pally was the site of the first ever TV broadcast in 1936. The events of the play take place on the eve of that broadcast, and the audience will be drawn into the underbelly of the Palace as frantic preparations take place, accidents happen, and we discover the true power and potential of television waiting to be unleashed.

It’ll be a thrilling evening that will allow people to see both Alexandra Palace and A Midsummer Night’s Dream in a totally new light.

A Midsummer Night’s Dream runs at Alexandra Palace from 3-28 September 2019. Tickets are available online. The Shakespeare Deck can be purchased online.