Last year, writer and actor Tom Hartwell brought his latest play to the stage at Theatre N16; a solo show about the modern generation entering their thirties, Before 30 made it to my top shows of 2018. It came back for a brief run at Waterloo East Theatre earlier this year, and is now making its way up to Edinburgh for a stint at the Festival Fringe prior to a one-off performance at the United Solo Theatre Festival in New York this November. Hartwell was due to don the Deliveroo gear once again – as well as re-join the Bite-Size team for their breakfast show – but a diary clash has forced some re-casting, with fellow Bite-Sizer Thomas Willshire landing the role of Chris.

This true to home one man show tells a surreal and honest story about mental health that any age can relate to. Told across twelve chapters and combining elements of visual story telling, direct address, multi-rolling, spoken word and stand up comedy.

“It’s been mad!” says Hartwell, “But coming out the other side of it now with Thomas Willshire, it’s in safe hands. He knows the script better than I do! He’s very much by the book.” Even though he’s gutted not to be there himself, the challenge of passing the handlebars over to another actor seems to be bearing fruit. “It’s exciting because it means you see a new actor’s version of it, and you see how they play it and what they bring to the table. It’s the same play that we brought to Waterloo East earlier this year, so it’s a bit more refined than our N16 one, and obviously cut down a bit to make that sweet run-time of the Edinburgh Fringe. It’s been lovely to know that you can make changes to a play and it’s getting progressively better… Hopefully! I’m very much looking forward to seeing what Tom brings to the table.”

Willshire won’t be getting all the glory, however, as Hartwell will be reprising his role for the one-off New York performance: “I’m just going for a holiday really, a holiday with a little bit of work tacked on!”

Before 30 follows Deliveroo employee Chris, as he negotiates the end of his twenties and the weight of expectation he feels about what he should have done with his life by this point. “Writing a play is cheaper than therapy; you get a lot out of your system just writing it down. You ever do that thing where you write an email to a co-worker who you just really hate? You never click ‘send’, but just writing down stuff…”

“And it was never a big “woe is me, I’m turning 30, look at my first world problems” kind of thing, it was more getting to the root of why people fear turning a certain age, and why does this one matter? What’s the difference between 30 and 31, 29 and 30? And it is just the value we place on those numbers.” What also became apparent was that there are certain life milestones associated with becoming a 30-year-old. “What was interesting was people started having conversations with me going, “Oh, 30? So mortgage, kids, family? Got a girlfriend, what’s going on there?” There’s an expectation around where you should be at this point in life. Certainly with social media, you see in your newsfeed – as the play goes on to say – various friends celebrating life milestones (new house, new job, new baby) and it can be quite daunting. Especially when two generations ago our grandparents would easily be able to get on the property ladder, before the recession, before property prices went stupid. There’s a lot of expectation on young people now about where you should be at certain points. And ultimately the play is saying it doesn’t matter. It doesn’t matter as long as you’re happy.”

“So that was the initial stepping point. I just wanted to write a play that reassured people, hopefully didn’t give people too much of an existential crisis, and say “It’s OK not to be OK” at any given point in life.”

I certainly found that it had an effect on me when I watched it back in May 2018, having passed through that same barrier myself and initially dealing with it only slightly better than Joey in Friends. “It’s interesting you say you made your peace with it, like something’s been done to you; like you have been affected by time and you have to accept it and the beautiful thing now that we’re past that milestone – I turned 31 this year – is that no one cares! No one cares, it doesn’t matter.”

The production I saw at Theatre N16 was far from a full stop, as the play has continued to evolve. “I came back from the Edinburgh fringe last year completely inspired by spoken word artists”, Hartwell explains, “Even on the train back from Edinburgh last year I started adapting some of the stuff into spoken word, and I’d never done any spoken word stuff before so I wasn’t sure if they were going to gel, but I just found at moments of vulnerability it worked quite well. It’s just another form of storytelling that gives the play a bit more meat on the bone, I guess? And a bit more variety for the audience.”

It’s not just the patrons who can reap the benefits of a change in tack. “I can get quite bored onstage if I’m doing the same thing for an hour (hopefully I don’t, because it’s a very exciting play!), but it was just really nice; doing a one person show – as any actor will tell you – is gruelling and lonely, but also really rewarding. You want to try and find new things to challenge you. So the main change from the N16 run to the Waterloo East run was introducing spoken word into various points in the play. And the feedback was really positive, so we’ve kept that in for this one.”

This evolution will undoubtedly continue, with a new actor taking on the role and interpreting the lines in his own way – and Hartwell is completely open to this. “I’m not one of those precious writers who will say, “This is the bible of the play”. As long as you’re telling the story in its entirety, how you get there… There’s definitely roads open to you. You have to allow the actor to have that permission to do so, I feel, otherwise it is just a copy & paste scenario where he is just performing.” So this will be Willshire’s version of Before 30, and that is a positive for audiences as well as actor. “I think for the audience they need to feel like it’s tailored to them, just as much as it’s tailored to the actor – so it’s not going to feel awkward. I have a certain way of playing with the audience, Tom has a very different way of doing that, and it is making sure that it’s keeping to the core of the play but giving the actor enough freedom to explore the text.”

Not only is Hartwell missing the chance to perform his one-man show (including the glamorous task of flyering in Deliveroo gear), but will also be unable to return to the Big Bite-Size Breakfast Show. He made his debut with the company last year, also performing in their play Neverwant. “Once you’re in that bubble it’s very hard to get out of it. I am genuinely gutted I’m missing it this year. It’s just so electric.”

Last year’s experience was very different to his first time at Edinburgh Festival Fringe, taking his debut play (a 10-hander) and facing a lot of challenges along the way. “To come in with a company who had been established for about 12 years, had the QueenDome venue/Pleasance relationship, were selling out shows before they’d even really got going, and having a line of people queuing up each morning… A great way to start the day, and it’s a true gift for an actor to have that in the Fringe. I learnt a lot from how they operated. And even though I’m not going up this year I still was involved in helping read through some of the scripts, so I kind of know what they’re bringing this year, and again it’s just as exciting. So a little plug for Bite-Size Breakfast. Free coffee and croissants and strawberries! All of that will be there. They’re going to be at the Pleasance Forth this year, so a bigger venue – in the Courtyard, not in the Dome for once – which will be very interesting to see how they do that. But I’m sad to be missing out on that.”

Before 30 will be running at Underbelly Cowgate, and their assistance has proved invaluable. “They’ve been absolutely fantastic in terms of their support, and marketing. Doing a one-person show is daunting because it is just you, really. In terms of marketing and stuff there’s no big PR team behind me, it’s just little old me! So Underbelly have been great.”

Having seen the previous version of this play (and been the grateful recipient of Bite-Size’s coffee) last year, I wholeheartedly recommend you add both to your schedules for August. There are three different selections of breakfast show (of course they call them ‘menus’) so you can make three separate visits and see new short plays each time – plus 10.30am is still a pretty civilised hour to be beginning your theatre day. And a 2.20pm start for Before 30 gives you plenty of time to grab some lunch and stroll between venues (perhaps bumping into Willshire on the way!).

I’ll leave the final words to Tom Hartwell: “So go along and see this purely out of the respect for seeing someone do a one-man show after doing a breakfast variety show in the morning. It’s going to be nuts! But if anyone can do it, it’s this guy.” 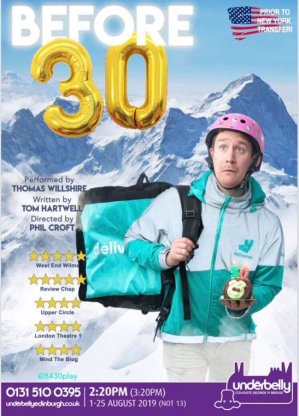 One thought on “Before 30: “Writing a play is cheaper than therapy””