Last year I wanted to go to at least one stand-up comedy show each day I was at the Fringe; I ended up just going to one (though it was the brilliant Harry & Chris Save the World, so a top choice). I’ve managed to rectify that mistake this time round, seeing the prescribed one comedy show per day – each at a different time of day, too, for variety. I’m still figuring out how best to review stand-up shows, so I thought the best way was to put them all together in one post and do a mini-review for each, just to give you a flavour of the show and my reactions. 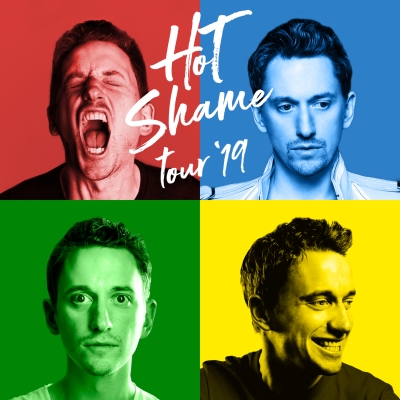 Of all the comedians on the bill at this year’s Fringe, John Robins was top of the list for me. In him I see a bit of a kindred spirit: Queen obsessive, cricket fan, and serious overthinker. Opening with a reading from his book of ‘Hot Shame’ (basically the equivalent of that voice at the back of your head that’s oh so keen to remind you of the numerous ways in which you’ve embarrassed yourself) as a “little bit of fun”, over the course of an hour you get an insight into how his mind works (the dehumidifier routine is a prime example), the gist of a “Millennium Man”, and that sometimes it’s OK not to question things. A cry-with-laughter hilarious show, with serious points deftly sprinkled around the silliness – and a healthy blast of Hot Space before & after.

Hot Shame ran at Pleasance Courtyard (Pleasance One). Details of the tour are available on the official website.

Harry & Chris: This One’s For The Aliens

After you’ve gone down the comedy-rap-jazz street once you’ll keep coming back for more. Of course I had to see Harry & Chris at this year’s festival! Having saved the world last time round, 2019 sees them focusing on trying to make friends with the Universe (and the audience, as they offer flying saucers as you head into the venue). As well as the always fun freestyle rap – populated by suggestions from the audience – you also have the chance to get to know Harry and Chris a little better, with the incentive of a prize at the end. From a touching song from Chris to his new son (Little Man) and Harry outing his own godfather spin on it (Little Guy) to the new singalong classic about something everyone on Earth has in common, this show really does have it all.

This One’s For The Aliens ran at Underbelly Cowgate (White Belly). Details of the tour are available on the official website.

Kicking off a show by telling the audience you’re going to be lying to them for an hour perhaps isn’t the obvious way to go, but it certainly works for Glenn Moore! This fast-paced show lets us see the two sides to the stand-up comic: Journalist Glenn and Showbiz Glenn. There’s no doubt that he’s king of misdirection, constantly building up to unexpected punchlines – barely giving the audience time to catch their breath as he launches from story to story. This is an intricately constructed show, with plenty of running jokes and recall that definitely keeps you on your toes, but also keeps you laughing.

Harry Baker (of Harry & Chris fame) is also a World Poetry champion, and has recently celebrated his 10,000th day on the planet – so what better way to mark this occasion than by entering a spoken word/poetry show in the comedy section of the 2019 Edinburgh Festival Fringe? This show is a truly wonderful hour that fuses storytelling, poetry & comedy, allowing Baker to feel comfortable in his own skin and share his passions & experiences with the audience. We hear about the time Ice-T judged a rap battle that he took part in, how he managed to complete the London Marathon, and words of advice to his younger self (and his cousin) on how to cope with bullying. These poems are clever, funny & honest, and speak to anyone who’s ever struggled to accept their personality & passions.

The title of Alun Cochrane’s new shoe initially made me think of a disused episode title for I’m Alan Partridge, but with the benefit of hindsight I can now see why this title was chosen for the Cockerel’s new stand-up show. He warns at the beginning that he’s going to treat us like adults; he makes a fair point that there are things that should be implicit (and particularly that you learn this as you grow up), for example that comedians probably aren’t being serious a lot of the time – it is, after all, their job to tell jokes. Whilst a fair amount of what he says does make sense (coping mechanisms, words losing their meaning), probably an equal amount misses the mark completely – I, for one, am tired of the Millennium Bug argument that accompanies talk about a No-Deal Brexit. The constrained laughter in the room sadly said it all.