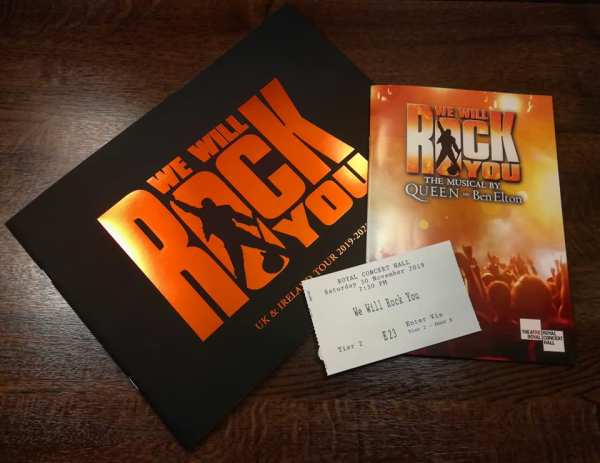 Well… When I planned this challenge week I thought I would have more time to prepare for it than I actually did! It has been really good to whack Queen on the mp3 player (almost exclusively) again, especially after a few days of stomping around to The Clash, and it was interesting to try and branch out from the usual posts you’ll see on here.

I did have a few slip ups during the week, thanks to weather and stress, but on the whole I think it all went off rather well on the whole. I did at least get to the key Freddie locations that I’d intended and of course, managed to finally see We Will Rock You. If you missed out on anything, I thankfully managed to keep up with my diary, and shared a few things via Instagram stories and #MindTheBand on Twitter.

On top of this, I celebrated a few major album anniversaries, reminded myself of the band’s videography, and did a couple of reviews:

In the end, I think my favourite part of the week had to be We Will Rock You. Yes, it was marred a little by a lack of mic volume in the first half (it was a bit difficult to hear some of the dialogue from the side seats – the concert hall acoustics probably didn’t help either), but I had been rather convinced that I was going to hate it, judging by the rough idea I had of the story and my past experiences with shows of this kind. I did look forward to it, and was cautiously excited by the time the day came around, but I never imagined the high it would bring. I did anticipate the blubbing (because that’s what I’m like), but everything else was just a bonus. And I absolutely will be finding a way of seeing the show again!

Whatever issues I’ve had with getting things done this week, it’s been fun to try and work on writing about music for a bit – I don’t do it too much, especially on the blog, so it’s something that will need a little refining over time if I’m to keep it up, but I do hope to increase the amount that I do just to provide a little more variety. And, who knows, maybe another #MindTheBand week awaits..?