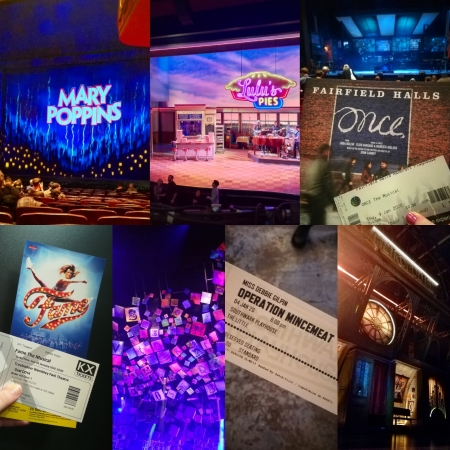 Well that was one way to start the new year… And considering everything else going on around the same time I think I managed to cope rather well, to be honest – if you were following my diary posts and Instagram stories you’ll have a better idea!

This time I began my week on a Saturday, which was my first full day back in London after an extended Christmas break at home with my family. I had immediately booked a ticket for the first preview of SpitLip’s Operation Mincemeat when the run was announced, and unfortunately didn’t get my hands on any others so it forced my hand somewhat… Having only seen it once back in the summer last year I couldn’t remember some of the details (so wasn’t exactly sure what had been added in/updated), and I only recalled the act 2 opening number just as the interval was coming to a close – and by the time they got into it I was crying with laughter. I don’t like having to go out on Sundays, but Fame the Musical was more enjoyable than I anticipated so it felt like the endeavour was worthwhile.

As Monday was my first day back at work, I decided Waitress (as one of my favourite shows of 2019) had to be the one to choose, and then on Tuesday I made the most of the New Year Sale to get a great seat for Matilda. Wednesday had to be a return to Amélie (I’m definitely in denial that it’ll be closing soon), and Thursday saw me making my first ever visit to Croydon (woop) for the touring production of Once; for me it didn’t quite live up to the West End version, but it was definitely nice to see it back. Closing the week with Mary Poppins turned out to be the best decision I could’ve made, as I was practically dancing my way out of the theatre.

During all of my journeys throughout the week I decided I’d read a tenuously related book… Another of my 2019 favourites, High Fidelity, obviously began its life as a Nick Hornby novel – and I managed to devour the whole thing between Saturday & Friday. I also dug out as many of the cast recordings in my possession as I possibly could, and they were my sole listening fodder during the week (I’m allowing Rocketman as it is at least a film musical – and probably will grace the stage at some point). Plus I even had time for film night on Sunday, which allowed me to watch La La Land again for the first time in ages.

The whole week turned out to be absolute top quality, even if I do say so myself! With a range of genres and stories (including some of my favourite shows) there was plenty to keep me entertained, and not feel too musical-ed out. If I had to pick my highlights of the week, I think I’d have to go with the bookends of Operation Mincemeat and Mary Poppins, just for the sheer joy they both brought me – and the fact that I’d scheduled them at exactly the right times in the week.

I also did a better job than the last couple of challenge weeks at keeping on top of my writing, getting a combination of posts out during the course of the week:

I hope you enjoyed my ramblings this week, and have maybe been convinced to go and see one or other of the shows that I attended…

One thought on “#MindTheMusicals 2020: round-up”