The Show Must Go Online last week kicked off with The Two Gentlemen of Verona to great acclaim, and this week went headlong into the potentially problematic The Taming of the Shrew. I say ‘potentially’ because things are obviously a bit different now, compared with attitudes in Shakespeare’s time – but just because he’s written a play where a woman is ‘tamed’ doesn’t necessarily mean he endorses it. There’s a lot up for grabs with the right direction.

My most favoured approach is a gender reversal; the RSC recently did just that, depicting a matriarchal society in which men were the ones who are always hard done by and abused by the women in power. It deftly highlights the imbalance between the sexes in real life and should make you think on it – though when a friend went to see it she overheard someone saying that they preferred seeing women on the wrong end of the mistreatment… So not everyone’s a fan!

For this version we have a more typical setup, with another impressively diverse and international cast taking on the task. Playwright & actor Debra Ann Byrd took charge of introducing this week’s play, enjoying the chance this project provides for them to “share our love of Shakespeare with each other and the world”. The Taming of the Shrew “provokes much conversation”; it is a comedy, and has many characteristics in common with Shakespeare’s other rom-coms, though it shines a light on married life more than they usually do – even if it isn’t necessarily the most typical marriage you’ll see. The two main motifs running through the play are those of fathers & their children (of marriageable age) and of domestication – both highly relevant to the original Elizabethan audiences. What we can consider now about the “Shrew” is this: is Kate really wild, or is she just pushing back against society? 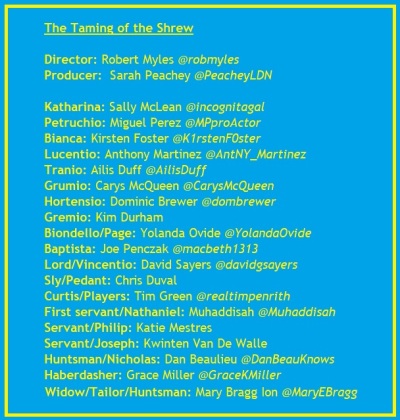 So, the play is set in Padua and zones in on two sisters: Katharina and Bianca Minola. The latter is inundated with marriage proposals but, being the younger sister, her father Baptista has insisted on Katharina being married off first before he will consider who is best suited to his beloved Bianca. Enter the roguish Petruchio – his father has died and he’s on the lookout for a rich bride. His friend Hortensio is one of Bianca’s many suitors and jokingly suggests Petruchio marry Katharina, which would have the happy side effect of making Bianca available for him to win over. It doesn’t take much to convince Petruchio to give it a go, and he quickly wins Baptista’s approval (if not Kate’s), leaving Hortensio to scrap it out with Gremio and the newly arrived Lucentio for Bianca’s affections – and her father’s blessing.

This week’s task was to listen out for any references to animals, tying in with the play’s title. After Bear’s supporting performance as Crab last week, we were inundated with dogs for the induction scenes, leading to my new favourite stage direction ever: exeunt doggos. I have to admit that I got so engrossed in the play that I kept forgetting to note down animal references (I suppose that’s a good thing, really!), but some of my favourites that I did get down were “asses”, “buzzard”, “turtle”, “wasp”, “hen”, “cock”, “crab”, “dove”, and “shrew” – all from Katharina and Petruchio’s exchange upon meeting one another. Incredible.

It’s only the second week of this project, but already some quite extraordinary innovation is being brought in; The Taming of the Shrew is actually quite a physical play, particularly when Petruchio’s involved, so it was thrilling to see a fight scene (put together and performed by Yarit Dor & Enric Ortuno) incorporated as part of Kate & Petruchio’s first meeting. The amount of slaps, whacks, and other physical feats achieved by the rest of the cast across the virtual space was equally impressive (Anthony Martinez’s Lucentio passing Ailis Duff’s Tranio his “cape” was a definite highlight) – it’s a real credit to their creativity and the magic of this emerging art form.

Even with all this going on, the words still take centre stage. Thanks to this (as well as incendiary performances from Sally McLean as Kate and Miguel Perez as Petruchio), I really felt like I got a completely new insight into their relationship, and particularly the character of Katharina. She can be portrayed as a broken woman, beaten & psychologically abused into submission, but equally she could just have quickly learned how to ‘play the game’ and found ways of making it work for her; that McLean had Petruchio kiss her on the cheek rather than give in and kiss him to me suggests that Kate has him under her power in at least a small way.

We must also remember that Kate & Petruchio’s story is performed as a play for the drunkard Sly – set up at the beginning, but discarded by the end. How does that affect the overall message of The Taming of the Shrew? That’s probably a whole other blog post in itself, but it’s interesting to ponder – and in this format I found it opened up my thoughts on this contentious play much more than expected.

Next week: Henry VI, part one

7 thoughts on “The Show Must Go Online: The Taming of the Shrew”