Reading that the Globe may struggle to come back from this current crisis without the help of donations and emergency funding didn’t seem quite real. When they announced their forthcoming summer shows back in January, I must admit that I did wonder whether the rather bland programming had come about because there were some financial shortfalls – though nothing a fairly populist season couldn’t sort out – but even having that at the back of my mind didn’t prepare me for the facts being laid out in the cold light of day.

Considering that Shakespeare’s Globe does so much more than simply put on plays in its two performance spaces (the Globe Theatre and the Sam Wanamaker Playhouse), you’d think that it would receive some sort of government funding as a matter of course; it has fingers in so many educational pies that state assistance should be a given. Whether it’s providing teaching resources for students of all ages, running courses of its own (including summer season-themed study days, and a collaboration with King’s College London on an MA in Shakespeare Studies), or putting on designated family activities during school holidays that will entertain and inform children & parents alike.

Research is also conducted in and around Shakespeare’s Globe, covering all sorts of related topics – and often shared with members of the public either through short free talks & workshops, or in the form of a symposium around a set subject of interest. Recently there was a focus on ‘Women & Power On The Early Modern Stage‘, for example. Plus there’s the neighbouring museum and regular guided tours of the Globe Theatre that would usually take place throughout the day, seven days a week.

You’d think its value as an educational resource would give it some hope of assistance from the government, as this kind of thing seems to be of far more value to them than its status as an iconic cultural hub – unlike anything else in London. Given how much reliance the country has had on the arts during this crisis, in one way or another (and despite a good chunk of that industry being forced completely out of work), it seems frankly ridiculous to continue to ignore the value theatre brings to our lives and the economy. It’s short-sighted to the point of blindness; maybe a 30-minute drive to Barnard Castle is in order..?

All this, however, pales into insignificance when you consider the very personal effect these places have on us as individuals. As much as I love theatre in general and want every single auditorium to survive this, I feel I personally have to advocate for the Globe much more strongly than any other theatre. Aside from the Harold Pinter Theatre (where I spent two years following Sunny Afternoon), I can’t imagine that I’ve spent more time in any other theatre in or out of London since I first started going to shows just over eight years ago.

I still remember the summers of 2016 & 2017 vividly; I first visited the Globe when Emma Rice was in charge, thus making the double discovery of the theatre and its artistic director in one fell swoop – both remain incredibly important to me. I doubt Rice’s A Midsummer Night’s Dream will ever be bettered (although last year’s Bridge Theatre production came mighty close), for one thing; Imogen later that first season was a revelation, 946: The Amazing Story of Adolphus Tips firmly tethered me to Kneehigh, and the entire ‘Summer of Love’ season in 2017 filled me with utter joy. That Romeo & Juliet was unexpectedly visceral, Twelfth Night a dream come true, and Much Ado About Nothing just a perfect piece of theatre. That’s not even mentioning the indoor shows! Romantics Anonymous, anyone?

To spend a whole week there in August 2017 for my #GlobeChallenge was a real thrill – and timing that during the Festival of Independence was the best idea, as I ended up learning a huge amount about Partition in India (something I basically knew nothing about beforehand) on top of all the Shakespeare. Theatre can do so much to broaden your horizons if you’re willing to put in just that little bit more effort. 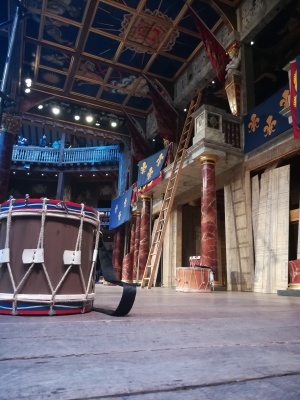 It would have been understandable if I’d just cut and run once Emma Rice was forced out of the artistic directorship, as things would not be the same no matter who succeeded her – the midnight matinées wouldn’t feel like festivals, for one. However, as they didn’t appoint a middle-aged white man (there was one in particular I had been dreading) – and as I’d not actually experienced the Globe in its ‘traditional’ setup – I thought it was only fair to give things a chance. At least with Michelle Terry in charge the 50:50 gender casting policy has stuck (and made for some sublime line-ups), and it was nice to get a few more plays in across the season.

Though the Globe doesn’t hold the same magic for me as it once did, that’s not to say it doesn’t remain hugely important to me. The cycle of history plays that spanned Winter 2018/19 – Summer 2019 – Winter 2019/20 was definitely the best thing to have happened to the place since Terry took over, and after a slightly wobbly inaugural season I felt that things had started to settle a bit. I will never agree with the lack of amplification in a world full of noise pollution, but that’s a minor thing in comparison to the place shutting up shop for good.

If this period of shutdown has proved anything, it’s that Shakespeare is our go-to-guy when we need a bit of drama or entertainment (with Mind the Blog favourites The Show Must Go Online leading the charge) – and surely the Bard’s spiritual home on Bankside should feel some of the benefit of that.

If you would like to donate to Shakespeare’s Globe, you can text GLOBE5 / GLOBE10 / GLOBE20 to 70460. Alternatively, donate online via PayPal, through the Globe’s website, or by making it your chosen charity on smile.amazon.co.uk. The ‘Read for the Globe‘ project is available to stream on YouTube.

2 thoughts on “Shakespeare’s Globe: “Parting is such sweet sorrow””