Once more unto Ancient Rome, my friends, once more… Wait, I’m still in Henry V mode! The Show Must Go Online took on Shakespeare’s political thriller Julius Caesar next – given that it’s director Rob Myles’ favourite of the Bard’s works, the pressure was on.

From memory I thought I’d only ever seen one production of this particular play, but it turns out that I’ve actually seen three… One of the forgotten versions was a student production from Rutgers Conservatory at Shakespeare’s Globe (sat outside on a freezing February evening), and the other (Spada Productions) I wish could have remained forgotten as it was dire & over-long – it definitely didn’t do the play justice, let’s just leave  it there. The one that obviously does stick in my mind is the Bridge Theatre’s first promenade Shakespeare offering in 2018, with the likes of Ben Whishaw, Michelle Fairley & David Morrissey navigating their way through an audience that got quite aggressively shoved around at certain junctures; though it may have needed slightly more thought as far as crowd responsibility was concerned, it showed how powerful the story still was.

Another duo were on hand to introduce the play this week, with lecturer, researcher & writer Faiza Qureshi joining Andy Pacino (writer, poet & former member of Lloyd Almighty). It was interesting to learn more about the film history of the play, as opposed to its stage history, with mentions of the 1953 Marlon Brando flick and one from 1970 featuring Charlton Heston & Diana Rigg. A good point was made that, though there aren’t that many female characters at all, they are the ones who do their best to try and thwart events; Portia via Brutus, and Calphurnia via Caesar. You can make numerous modern-day comparisons – one that I can definitely relate to is Cassius not understanding what people see in Caesar, as that fits well with less than capable managers & bosses finding themselves in those positions of power at your place of work. The key things to remember about the play are “ego, misjudgment & deceit” (on multiple levels), as well as the “final flaw” of cowardice. 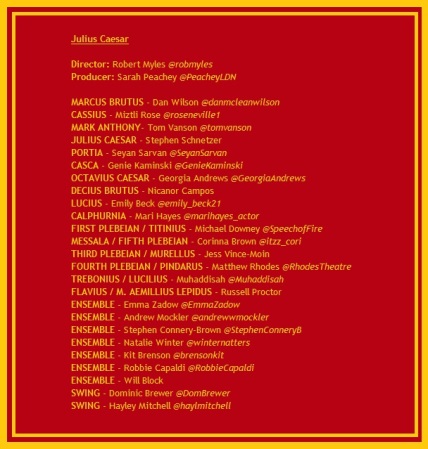 Caesar returns to Rome victorious, having roundly beaten Pompey’s sons in battle. With the city in full celebratory mode, a soothsayer cries out to “Beware the Ides of March!” – Caesar ignores this warning, though unbeknownst to him Cassius is already trying to recruit assassins. It will take some considerable persuasion to get Brutus on board, however, as he agrees that Caesar is a risk but finds it hard to justify killing him; after increased fears that he will be crowned, and being led to believe the Roman people were behind the plot, Brutus decides to join the group. He is quizzed by his wife, Portia, about the night’s goings-on, but manages to delay telling her his secret. Calphurnia (Caesar’s wife) has premonitions about the day’s events and almost manages to prevent her husband from going to the Senate, but when the conspirators all arrive to escort him in his mind is changed again. Caesar won’t live long to regret his decision, but how will the conspirators fare when the Roman people find out what they’ve done..?

What I was most intrigued about prior to watching the show was the direction in which it would take; would they hammer home the present-day parallels by going for modern dress, or would they let the story speak for itself and go full toga? I really wish I could’ve gone to see the Public Theater’s Shakespeare in the Park production back in 2017, which firmly fixed the recently elected Donald Trump as Caesar – this enraged certain sponsors and all those who failed to understand the actual message of the play. Yes, it depicts the leader being assassinated, but the way in which the play ends clearly shows that going down this route was not the way to stop a leader drunk on power: civil war erupts and Brutus & Cassius are dramatically defeated, leading to both committing suicide. The play deftly displays the rise & fall of the moral scales, with Shakespeare not explicitly aligning himself with either side.

I would obviously have been happy with either approach, but as the Bridge’s production was modern dress it was a good contrast to see this one in traditional costumes – especially as it would obviously have been a bit of an extra challenge for the cast to kit themselves out! (There are a few alumni in the cast, so they’d have known what they were getting themselves into!)

I found it rather interesting to look for the ‘hindsight’ moments; with so many instances of bad omens being ignored and advice being cast aside – and not just by Caesar – it really highlights the importance of good decision-makers being in charge. On several occasions Caesar is warned about going to the Senate – it’s sort of understandable his not listening to a soothsayer shouting at him in the street, but he’d do well to pay attention to his wife’s misgivings… Brutus doesn’t come out of this much better, however; by failing to tell Portia of the plan she’s denied the opportunity to help him come to his senses, plus he allows Mark Anthony to speak at Caesar’s funeral – even permitting him to praise the dead leader, thus giving Anthony the chance to get the masses on his side without risking his own life. This last event (“Friends, Romans, countrymen – lend me your ears”) was performed excellently by Tom Vanson, showing Mark Anthony as thinking on his feet and delivering the speech as if it were completely unplanned – and confirming just how much the conspirators have underestimated him.

In the panic of the promenade performance I never noticed the almost nerds vs. jocks element to this story, with Caesar saying “He thinks too much” about Cassius – and Brutus later coming in on the other side, dismissing Mark Anthony with “He is given to sports, wildness and much company”. Credit must go to the brilliant Dan Wilson & Miztli Rose as Brutus & Cassius, as they went through quite a rollercoaster of emotion from plot to aftermath; their scene on the battlefield was incredibly atmospheric, almost making you forget that you’re not in the room with them.

One of this week’s new things was quite fun, though took place in a deeply disturbing scene; as Cinna the Poet (Kit Brenson) is mistaken for Cinna the conspirator, an angry mob set upon her – and suddenly the Fifth Plebeian (Corinna Brown) is in the same shot giving her a good kicking! Not to be outdone, Robbie Capaldi decided to have a bit of fun with his facial hair throughout the show, leaving us groundlings wondering how he’d appear next…

Another triumph! Continued intelligent use of the technology and other tools they have to hand, bringing a timely reminder not to stoop to your opponents’ level.

One thought on “The Show Must Go Online: Julius Caesar”