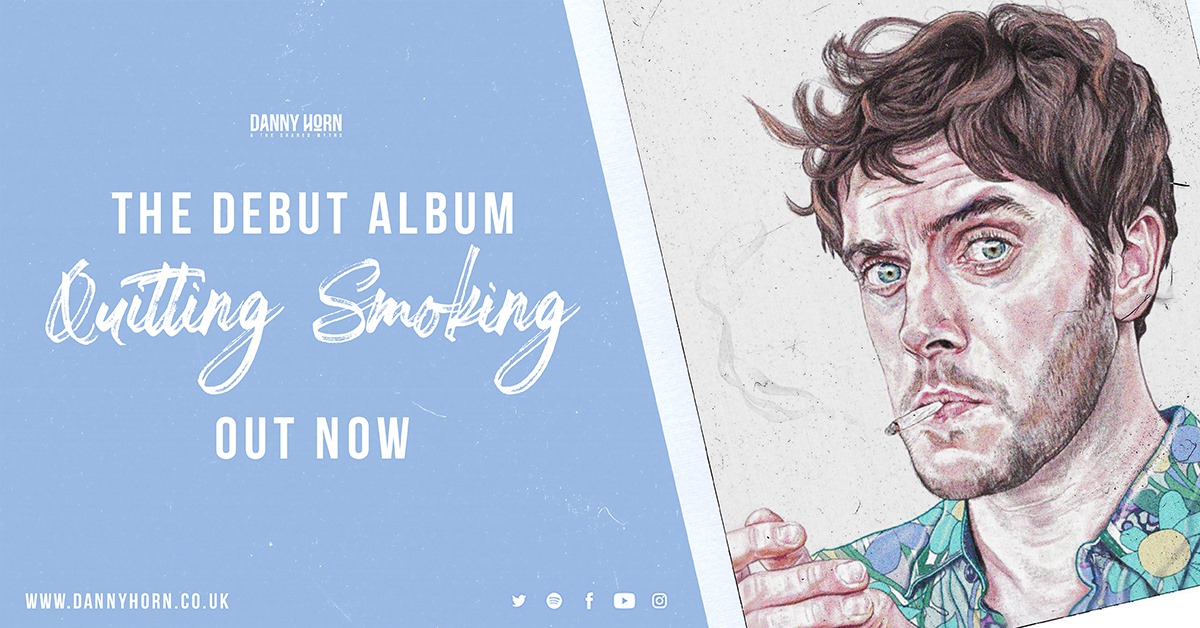 Earlier this year, Danny Horn & the Shared Myths released their debut album – Quitting Smoking – supported by a pair of innovative DIY music videos for the first two singles from the record. Due to the ongoing pandemic the band (consisting of Danny Horn, Megan Leigh Mason, Andy Gallo & Holly Cassidy) were unable to mark this momentous occasion in exactly the way they would have liked, but last week saw their return to live performance as they officially launched the album at The Spice of Life in central London.

I caught up with Danny, talking all things songwriting, creativity in lockdown, and the power of live performances.

It was a few years ago now, but after spending 12 months immersed in the world of Ray Davies it must have been refreshing to focus on your own compositions. Did this stint help you decide that music was something you wanted to pursue, or had you always hoped this opportunity might arise?

Well, I’ve been writing songs since I was about sixteen and sort of half-heartedly gigging them around without ever trying to really build on it – I figured that I was an actor first and the songwriting was more of a recreational thing for me. But there was a definite shift when I started playing Ray Davies. I thought a lot about how he’d written the songs, trying to get into that headspace, as a songwriter playing a songwriter that was the thing that interested me the most. And suddenly, all these new songs started coming to me. It was like it opened something up. I must have written two thirds of the album during that year.

Have you felt any extra pressure to be creative during this period of shutdown?

No, I wouldn’t call it pressure. Once I realised all of our promotional gigs wouldn’t be going ahead I had the choice to either hold the album back and wait for this to ‘blow over’ or just release it and make our peace with not being able to play it live. The album was starting to feel like a monkey on my back so we decided to just put it out there. We made some homemade music videos which were fun and really kept me sane in those early weeks of lockdown and people seemed to enjoy them. And it was funny, as soon we released the album I started getting all these ideas for new songs. I started trying to teach myself the piano, playing with different kinds of chord patterns and all of a sudden I had an entire second album’s worth of material ready to bring to the band.

How did your recent album launch performance feel in comparison with previous gigs?

It was oddly emotional actually, which I wasn’t really expecting. Live music venues have really struggled during this pandemic, many of them have closed for good. The Spice Of Life in Soho have been very good to us over the years and have figured out a way to put on gigs safely with all the social distancing measures in place. We were really moved to see such a great turn out, especially in this climate. There is nothing like live music; I didn’t realise how much I’d missed it both as a performer and a spectator. And also it was a bloody relief to finally launch the album four months after we released it. There was a special kind of energy that evening, we all felt lucky to be there.

Which song do you most enjoy playing live?

I played solo for years so anything with the full band is always particularly cathartic for me. There’s a weird little song called Underneath The Rolling Thunder which is always fun – our drummer, Andy Gallo, gets quite creative on that one; I’m always interested in what weird fills he’s going to chuck in. We have a new song too, called Jericho which is a nightmare to sing because the words are really fast but when we get it right, I think it’s about the most exciting song on our set.

Inspired by your “time travelling waltz” In This Life Or Another, if you could revisit any event(s) in music history, what would you choose?

Tough one. Maybe I would watch King Curtis play A Whiter Shade of Pale live at Fillmore West in 1971 – I first heard it at the beginning of Withnail & I. Apparently he got shot right after he walked offstage. The last thing he ever did was that phenomenal performance. I’d go there.

Quitting Smoking by Danny Horn & the Shared Myths is available to purchase or stream online. The album is also available in CD format.

2 thoughts on “#MindTheBand: “There is nothing like live music””