A bit of a swerve this week on The Show Must Go Online, as Shakespeare heads to the classical world with his version of Troilus and Cressida – the first of the ‘problem plays’, which follows last week’s comedy, Twelfth Night.

I have only ever seen this play once before, and I wasn’t quite sure what to make of it… The RSC had it as part of their winter season in 2018; Marlowe’s Tamburlaine was running at the same time (this in the Swan Theatre, Troilus and Cressida in the Royal Shakespeare Theatre), so I felt like I had all the incentive I needed to return to Stratford-upon-Avon for a weekend break. I’m pretty familiar with Greek mythology, and specifically the Iliad & the Odyssey, but I wasn’t all that sure about where the title characters of this play fitted in. The production felt quite odd, though a two-show day at the RSC (coming directly from London) is a very long one, so that probably didn’t help. Either way, I was excited to give it another go!

Introducing this week’s play was academic, associate professor & writer Vanessa I Corredera, who instantly acknowledged that it has been “oddly” categorised as a comedy by some; it’s more a “contestation for power”, and any so-called ‘problems’ with it are exactly what makes it interesting. Just like his series of history plays, Shakespeare has put his own stamp on the classic Greek story, taking the source and changing perspectives of characters & events; “honour, glory & triumph are in short supply” by the end of the play. Several themes become quite prominent through the course of the play – firstly, masculinity & pride. This goes right back to the beginning of the Trojan War itself, as it’s men arguing over where Helen should go (stay with Paris in Troy, or return to husband Menelaus in Sparta?), plus Achilles has a “big boy tantrum” with Agamemnon, and Hector puts his honour over his wife’s warnings by going to the final battle. Troilus also seems more concerned about how Cressida being given to the Greeks will affect him, rather than what it means for her. Another theme is desire, either to fight or to “enjoy the fruits of wooing” – in the case of the latter, it highlights the differences between men & women. Finally, “the worth of women and their reputations” should be considered when watching the play – particularly relevant now are the potential reactions of ‘why didn’t you say no, or fight back?’ to Cressida going along with the deal that has been struck which sees her sent to the Greek camp in exchange for a Trojan prisoner of war. 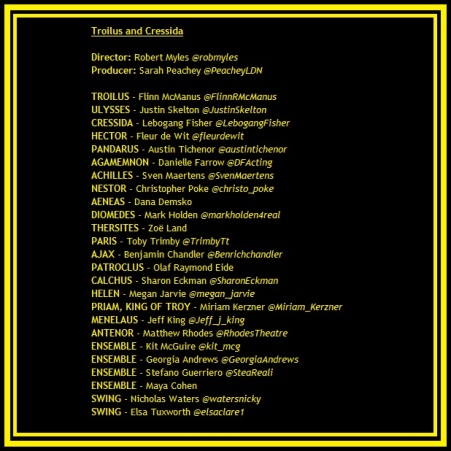 Helpfully for anyone who doesn’t know much about Greek mythology, the play begins with a prologue which lays down the background information – why they are fighting, and who the main players are. The titular plotline kicks off the play proper, with Troilus complaining of heartache to Pandarus, as he is in love with Pandarus’ niece Cressida; he assures Troilus that he has been trying to further Troilus’ cause, but hasn’t made a breakthrough yet. Or so he thinks… It turns out that Cressida is also in love with Troilus, but she doesn’t want to reveal it just yet because she’s enjoying his attempts at wooing her. Meanwhile, crisis is developing in the Greek camp, as the campaign has been dragging on and there no longer seems to be real authority in the camp anymore; Achilles reacted badly when Agamemnon took away one of his prisoners and is refusing to fight, dividing the camp due to varying loyalties. Though this may prove academic if the Trojans decide that it isn’t worth pursuing the fight any longer; they are paying a bloody price for taking Helen from Sparta, and princess Cassandra’s prophecy seems to confirm this – if Helen isn’t returned, Troy will burn…

It definitely is odd that some people consider this to be a comedy… There is constant talk of women as commodities, whether it’s Helen (at the eye of the storm, and seemingly something that can just be ‘given back’) or Cressida (traded without her knowledge or consent) – then there’s Cassandra, whose prophecies are dismissed as the hysterical ravings of a mad woman (something that’s oh so familiar to this day). Presumably, then, whoever decided this is a comedy was male & a misogynist! With all these serious & interesting talking points that come up, ‘tragicomedy’ is probably a better label; as it’s later on in Shakespeare’s career it’s understandable that he might have been keen to play with form a little – plus so many of his apparently out-and-out tragedies or comedies are on a knife-edge anyway, with one different decision by a certain character determining how the whole thing will end up playing out.

A clever move for this production to put Cassandra in charge of the prologue – not only is it an opportunity for a woman to take on this responsibility (as befits TSMGO’s mantra), but it also works really nicely with her powers of prophecy, almost suggesting that she’s overseeing everything and keeping tabs on what’s going on. Another great idea, making excellent use of Zoom as per, was to have each soldier’s camera turn on & then off again as they parade past Cressida & her servant – so we see what Cressida sees in that moment, and it doesn’t overcrowd the screen unnecessarily.

I promise I won’t return to this every time, but another potential bit of self-referencing jumped out at me in this one: Hamlet’s “words, words, words” reborn as “words, words, mere words” by Troilus late on in the play. I’ve also enjoyed that Shakespeare’s stage directions at the start of the scene quite often begin with “another part of…” – this time it was the plain, others have included places like the battlefield, the forest & the castle. I don’t know why, but I just really enjoy it!

Eminently satisfying, given how women are considered in the world of this play, is the amount of major traditionally male characters given to female actors this time round, with superb performances from the likes of Fleur de Wit (Hector) & Miriam Kerzner (Priam), amongst others. Austin Tichenor was excellent as Pandarus – the uncle a little too keen to get his niece into bed with Troilus, and who ends the play by wishing venereal diseases upon the audience (“And at that time bequeath you my diseases”). Flinn McManus and Lebogang Fisher also gave wonderful performances as Troilus and Cressida, capturing the initial fun & romance of their pairing early on, before their paths diverge and give the play a slightly different kind of tragic ending. As always, you can rely on The Show Must Go Online to clear up an historically difficult play and really open up the themes & messages locked inside.

Next week: Measure for Measure

One thought on “The Show Must Go Online: Troilus and Cressida”