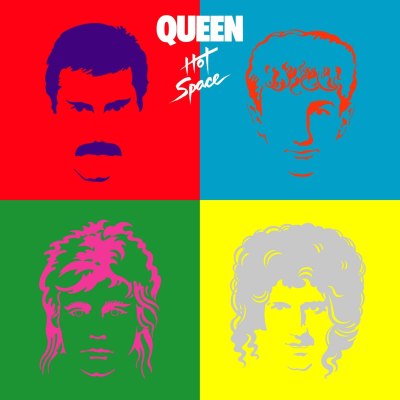 Disco and punk started to give way to ska, 2-Tone & the New Romantics in the early 80s; Queen continued to plough their own furrow, although this album was a departure from their usual style. In the weeks surrounding the release of Hot Space, albums by Madness (Complete Madness), Paul McCartney (Tug of War), and Roxy Music (Avalon) all hitting number one, with The Clash’s Combat Rock, Duran Duran’s Rio, and Pornography by The Cure all reaching the top ten. Ebony and Ivory by Paul McCartney & Stevie Wonder and A Little Peace by Nicole both reached the top spot in the singles chart, with Adam Ant’s Goody Two Shoes, Joan Jett’s I Love Rock ‘n Roll, and We Have A Dream by the Scotland World Cup Squad all featuring in the top ten.

This album has a bad reputation, but when you drill down into it there’s a lot more quality in there than you might at first think. Under Pressure, one of the band’s few number 1 singles, is an obvious highlight – and Body Language is an obvious cringeworthy low (although the video is pure entertainment, for all the wrong reasons). Everything else slots nicely in between those two extremes, as far as I’m concerned.

I have a bit of a soft spot for Dancer and Action This Day, plus Staying Power has so much potential – it’s definitely far superior as a live track, as evidenced by the Milton Keynes Bowl concert. They still have an obligatory full-on rock track in Put Out The Fire, which is a great one to stomp along to through your headphones, and though Cool Cat is such an un-Queen song, John’s funky bassline and Freddie’s incredible falsetto mark it out as a quality album track. I’d absolutely love it if one of the band’s future projects was Hot Space… Revisited to correct some of the odd choices and tighten up production a bit, because that’s the main issue for me.

Let Me Entertain You
The band went out on the Hot Space Tour in support of the album; they played 697 shows across three legs (9 April – 3 November 1982), and it was the last time the original line-up toured the USA (Queen + Paul Rodgers brought the band back to the States in 2005). This was the first time Queen brought a keyboardist on tour with them, employing Morgan Fisher on the European leg and Fred Mandel in America & Asia.