Hopefully, by now you’re familiar with the phenomenon that is The Show Must Go Online. The project was put together in a week in response to the COVID-19 crisis, which has seen theatres shut down and left actors & creatives out of work. They are working their way through Shakespeare’s repertoire of 37 plays, in the order it is believed they were written; so far we have seen The Two Gentlemen of Verona, The Taming of the Shrew, Henry VI parts one, two & three, and Titus Andronicus. It has been brought together by Robert Myles (director) and Sarah Peachey (producer) – each week the team grows and the productions develop into bigger spectacles.

To celebrate Shakespeare’s birthday, I thought it would be interesting to get an insight into the series from Robert Myles and what we might expect as it progresses… 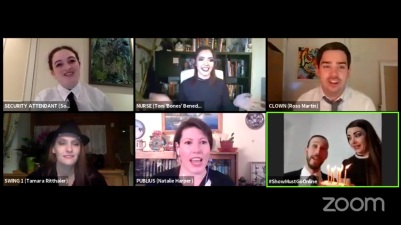 What does Shakespeare mean to you?

Fascinating question. Different things on different days. Right now, it’s my whole life – the show is a 24/7 endeavour for Sarah and I. Shakespeare, I’ve come to realise, reflects my tastes in other areas quite well. I was predisposed to loving it. I’ve always been attracted to intricacy in aesthetics – I love Islamic art, Heironymous Bosch, Salvador Dali, calligraphy… Anything that rewards you for looking more closely.

Similarly, in storytelling, I’m a sucker for archetypal mythology. I was obsessed with the original Star Wars movies as a kid, because they had vivid, intricate world building, supporting characters full of flavour and mystique, and strong philosophical themes being explored. As such, I can see why I became so passionate about Shakespeare. It can seem bewildering at first, but as you learn more about its secret rhythms and hidden structures, a whole world opens up to you. Then, as an actor, you can explore that world emotionally, as the characters go through these incredible arcs.

It’s important to point out that I hated Shakespeare in school. The absolute key to unlocking it for me was acting in it. What’s on the page is annotation, a score. It has to be said on your feet and out loud to bring it to life. No one spends £60 a ticket to read Beethoven’s 5th in silence, either.

When I first did Shakespeare, I didn’t want to. I was intimidated by it, like almost everyone else. But something about the difficulty of it hooked me in. It’s like the gymnast that makes tumbling look easy and effortless when the reality couldn’t be further from the truth. There’s something magical – and addictive, I think – in that.

I also talk about it as resistance training for actors. If you can resolve all the demands of Shakespeare – where technique and emotion and journey are all pushed to their extremes – most other forms of acting come more intuitively by comparison. It’s helped a lot in voice over work, especially.

So, I suppose to answer your question: it means a lot to me, in many different ways.

You have quite a quick turnaround between performances – what is the typical process for building each production (from casting to show night)?

Cast on Friday, load the actors up with resources on Saturday (usually including some last minute re-casting), first meeting Sunday evening, rehearsals Monday and Tuesday, show Wednesday, read and confirm the edit of the next play Thursday, repeat. So, no days off!

Throughout this, Sarah and I identify opportunity areas, workshop them (now with the benefit of fight directors Yarit Dor and Enric Ortuno, and Associate Stage Manager Emily Ingram) and then explore these moments with the actors.

We then do one-to-ones with actors who shoulder the biggest responsibilities in the show, and ask the supporting cast to attend these rehearsals so they get an opportunity to run their parts. We do this incredibly quickly – one actor will get about an hour to 90 minutes maximum to run their whole track. My focus is on text, fleshing out the world, and maximising the contrasts scene to scene, character to character, and so on.

A lot of the time the actors are left with notes to workshop, and we see how they come out on the night. Sometimes we don’t see certain scenes more than once before the live show. Sometimes we hear an actor’s voice for the first time on the live!

The actors we’ve had have been incredible – so game to cobble together costume and props, including some arts and crafts projects! Without that willingness, the shows really wouldn’t be what they are – a vibrant, anarchic, explosion of creativity and commitment. I believe theatre is ultimately an exchange of energy from actors to audience, and in times like these, actors need a way to give that energy and audiences to receive it.

We offer a truly live experience in a new format – consequently we’re constantly encountering new challenges, and driving new innovations. Due to the time constraints, Sarah and I are quickly becoming like a formula one pit-crew. Our innovation background drives a ruthless quest for efficiency.

What has been the biggest challenge so far?

Henry VI Part III was the biggest challenge to date. It was such a tightly focused play compared to the other Henry VIs, with a lot of characters very suddenly switching allegiances, and an impressive body-count to boot. The relentless flip-flopping had to feel earned, and the nihilism of the play’s perspective also needed to feel like something teachable, instead of just relentlessly bleak.

I didn’t respond as positively to the play on first read as I had the others, which pushed me to double down and make what I could find in there as vibrant as possible. I think it worked out for the best, as many have said it’s their favourite part. There’s no reason the director’s job should be easy! Part of the challenge is also the ongoing nature of the production. Sarah and I have to find time for the fundamentals – cooking, cleaning, sleeping, and about twice a week, grabbing an hour to decompress with some Queer Eye or Brooklyn 99. Despite being in lockdown, we’re busier than we’ve ever been.

Like many artists, we don’t have an income coming in, so that’s a challenge too – we, like everyone else involved, donate our time to the show for audiences. While most of our actors give a few days to the project and can sleep-in the morning after a show, we are here every week and already working on the next!

Because we have an almost entirely new cast every single week, a big challenge is also in on-boarding 20+ actors in an entirely new way of working. But ultimately, as Macbeth says, “the labour we delight in physics pain”. I’d be going out of my mind in lockdown if I didn’t have something like this to pour my energy into. I wouldn’t have it any other way.

Which play are you most looking forward to?

We’re about to enter a season of back-to-back BANGERS. Richard III, The Comedy of Errors, Love’s Labours Lost, Richard II, Romeo & Juliet, A Midsummer Night’s Dream… What more could you wish for?!

Are there any plays you’re slightly dreading?

Troilus and Cressida is one I’m really excited for AND intimidated by. Hamlet, of course. Ending on Henry VIII is an odd one, but we’re already thinking about how to make that as fun as possible!

Once all the Shakespeare plays are done(!), are there any others you’d like to give the Show Must Go Online treatment?

I honestly haven’t given it a thought! We have 32(?) more plays ahead of us right now. Once that number gets to 5, I might think about other plays, but as we’re scheduled to finish in November, I think I’ll be more interested in hibernating ‘til the following spring! I may be living in a cave eating roots by that point, so it’ll be appropriate.

Sir Patrick Stewart’s name has cropped up a few times in recent weeks – in which role(s) would you love to direct him?

I’d love to see him reprise his role as John O’Gaunt in Richard II, but I’d also love to see him as Leonato in Much Ado, or Polonius in Hamlet – he’s a brilliant comic presence, despite the fact we don’t often see him in comedy outside voice work.

Equally, I think he’d be brilliant as the Duke in Measure for Measure, Timon in Timon of Athens, or for something smaller – Duncan in Macbeth. Imagine the heat Macbeth would get for killing Sir Patrick Stewart!

I think his involvement, like that of Sir Ian (Sir Ian, Sir Ian… WIZARD!), David Suchet, or any of the original Barton/Hall alumni would be such a gift to both the rest of the cast and the audience alike. I know our cast for Henry VI Part II loved working with Wendy Morgan, who has been so game for getting involved. She trained in Shakespeare with Peter Hall, and has shared the stage with many of these names before now.

Acting, and classical acting in particular, has always really been an oral tradition. With the death of the rep system, people get precious few chances to “learn by doing” with luminaries like these. If that’s something the actors signing up could experience by being involved, even just for a couple of days, I think it’d be an extraordinary gift.

Similarly, I think it would also bring a huge amount of joy to our digital groundlings, who tune in every week to watch the shows live. What we’re doing is innovative and bold and fearless, freely accessible and accessible in how it’s produced. It’s Shakespeare for everyone, by everyone.

2 thoughts on “The Show Must Go Online: “Imagine the heat Macbeth would get for killing Sir Patrick Stewart!””