The butterfly effect. You know, where a tiny & seemingly insignificant event can have massive consequences further down the line. I’ve been thinking about it recently, because of Sunny Afternoon. (What else?)

The second time I went to see the show, I decided to go to the stage door afterwards. In the past, that was something I generally only did when I’d gone to see someone in particular – it’s a nerve-wracking thing for a shy person to do! But my first time down near the front of the stalls had given me such a good afternoon that I thought I’d go for it. Even as I stood next to the door I was waivering; so many times I almost changed my mind! But then John and George appeared, and this happened: 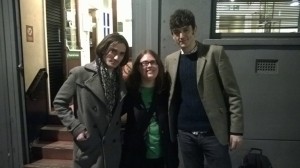 And then the next time I went to the show (a few days later, ahem!) I stopped by to say, again, how brilliant it was.

About a week later, I favourited a tweet from a fan of the show and mentioned that I was thinking of going again – as I was walking down the street I heard my name shouted across the street. Debbie isn’t the most common of names, so I guessed it was probably aimed at me; this is when I met Tracey! We had time for a little chat before the cast started leaving, and she introduced me to Tam and Adam. We both ended up at the show again a week later and have met up a few times since (and not just at Sunny Afternoon!).

In early December I decided to rush down to the Harold Pinter after work, as I finally had the chance to meet Sandie after a Wednesday matinée! This friendship began on Twitter and has since gone from strength to strength. Since then, we’ve met several more times, been to a couple of shows together – and had a fantastic evening at the WhatsOnStage Awards! Sandie’s a real gem and I feel so lucky to have met her. (She had her hair and nails coloured especially to represent Sunny Afternoon for the awards – how awesome is that?!)

Ksenia was the original Dedicated Follower – and considering she flies in from Russia for the show, it’s astounding how many times she’s been to see it now… After a brief Christmas break (the whole of which I was back in Somerset and feeling annoyingly ill) I returned to London, and one of the first things I did was to finally put a real face to the Twitter avatar! In the short amount of time I’ve known Ksenia, I’ve learnt so much (from The Kinks to theatre in general) – and whilst we’re constantly quoting the show to each other, we have managed to spend time in places other than the Harold Pinter Theatre, believe it or not…

After a few weeks of following the Sunny Afternoon fan page on Twitter, I finally met Jess (the girl who runs the page) in early January. We now both feel like we’ve known each other for years – but in a good way, honest! It was down to her that I ended up going to every evening show the other week (plus the Saturday matinée, quite by accident!) for the Sunny Afternoon Challenge. Other than being completely bloody knackering, that was one of the best weeks of my life (no exaggeration) – and it may not have happened if it hadn’t been for Jess’ influence, encouragement and coffee! The next stop will be both of us going to every evening show, or even every show in a week if we can organise ourselves… 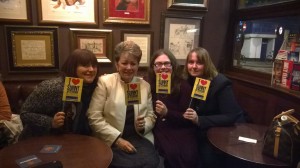 And where do I start with Aussie Jess? (It used to have a multitude of Sarahs as friends, now I know more Jessicas.) She just happened to see the show on the same day I was doing my first midweek matinée with Sandie, and original Jess had come to meet us at the stage door. I was also in during the evening, and Aussie Jess wanted to buy the soundtrack before she left, so we ended up chatting outside the theatre for well over an hour – then the next day, I think, she used Twitter to track me down in the Theatre Café. And we were nigh on inseparable ever since! Jess has been a particularly bad influence on me (fuck knows how much I spent on Sunny Afternoon during the month she was in London), but I wouldn’t change it for anything. Even the time I found her waiting for me outside my workplace! I know you’ve only just gone back to Australia, but get yourself back here soon. We miss you already! 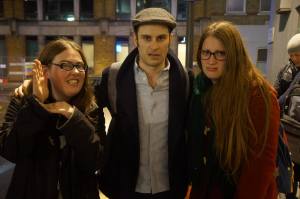 And there have been many more lovely people I’ve met along the way (several times): Ceri, Rose, Jean… To name but a few! Somehow we’ve managed to spend a few shows together, plus a bit of time at a certain stage door and/or the pub. It’s been marvellous. One thing that sticks out in my mind is the Saturday night bunting!

Unfortunately, as with so many things in life, there is a small number of people who seek to spoil the niceness – but I don’t want to dwell on that here. I have no time for cyberbullies and their immaturity.

Over the past few months a wonderful community of ‘Afternooners’ has developed, which I think encapsulates the spirit of our beloved show entirely. We may be separated by geography, but we are now (and will forever be) united by Sunny Afternoon. 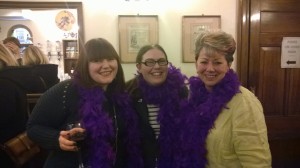 And all this might never have happened if I hadn’t stopped at the stage door in November… It doesn’t bear thinking about!

8 thoughts on “See my friends”